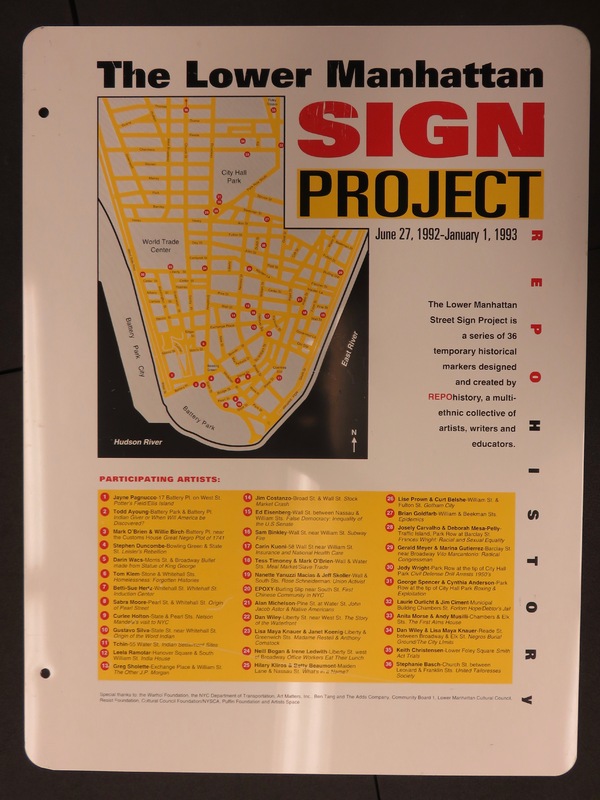 About REPOhistory
REPOhistory was a New York City-based collective of artists, writers, educators, film makers, performers, historians, art historians, and community activists from diverse backgrounds (REPOhistory 1992, “Sign Project Press Guidelines”). The name comes from the 1984 film “Repo Man,” for repossessing history (Sholette 1999, 4). The group produced over a dozen collaborative art projects while they were active between 1989 and 2000 (Sholette 2004, 285). Although some of the work was in traditional art venues, REPOhistory was committed to widely accessible public art, “outside” of traditional art venues (Knauer “Lower Manhattan Sign Project”). Based on reviews of their work, the group was interdisciplinary between visual art, urban activism, social history, and radical pedagogy (Sholette 1999, 4). The REPOhistory Archive, which includes operation records, proofs of original artworks, promotional materials, source materials, and the files of several founding members, is a part of the Downtown Collection of the Fales Library and Special Collections at New York University (The Fales Library and Special Collection 2016).

About the Lower Manhattan Sign Project
In May 1989, a group of a dozen people met in response to Gregory Sholette’s proposal for artists to “retrieve and relocate absent historical narratives at specific locations in New York City through counter-monuments, actions, and events” (Sholette 1999, 4). These histories would be used to comment on contemporary social issues as well (Costanzo 2000, 32). In addition to revealing absent or missing histories through documents, oral histories, and public records, REPOhistory also aimed at questioning standard historical representation (Sholette 1999, 4). This coincided with the public debate over how to teach American history from a culturally “inclusive” perspective (Sholette 2010, 85). The eventual outcome of this initial meeting was the Lower Manhattan Sign Project (Sholette 2004, 286).

Initially, the project was going to be an illegal, guerrilla art installation, but as they planned and researched they decided that due to the large investment in the project it should obtain permits for posting the signs (Sholette 2010; REPOhistory 1993, 4). Member Tom Klem spent several weeks working with the Department of Transportation to obtain permits for six months, which were extended for an additional six months (Sholette 1999, 4-5; REPOhistory 1992? “The Following are some thoughts…”). The initial dates for the installation were June 27 to December 27, 1992, and after the extension, the signs remained up through June 30, 1993 (REPOhistory 1992 “Press Release”; REPOhistory 1993, 1).

REPOhistory made walking tour maps available for free at the visitors information booth at the World Trade Center throughout the installation (REPOhistory 1992 “Press Release”). In addition to the free maps, REPOhistory offered two different guided walking tours lasting two and half hours and visiting fourteen or fifteen signs. These guided tours covered basic information about REPOhistory, the history of the project, the story of the signs, and the signs in the context of the physical and mental landscape (Bogan, “Walking Tour Outline”).

In 1999, part of REPOhistory’s final project, Circulation, used REPOhistory’s existing website as a creative component to the project, because they viewed the internet as a logical next step to their interest in public art (Costanzo 2000, 33). Due to this transition onto the internet, I felt an interactive map of the Lower Manhattan Sign Project was a fitting way to share the project and retain the site-specific nature of the project.

To create this site, I used the digital application Omeka with the plug in Neatline. The site was intially hosted by Digital Scholarship Services’ NYU Web Hosting and is now hosted by Reclaim Hosting.

The GeoNarrative is an interactive map of the Lower Manhattan Sign Project and aims to explore the signs at their site-specific locations and study three of the themes the signs address. The signs were mapped by consulting the catalog for the project for its map and location descriptions. For a few of the signs, the street description did not quite correspond with the building descriptors or marked location on the map (REPOhistory 1993). For these cases, I tried to use the background of the pictures of the signs in the catalog and followed the building description locators. For locations with multiple signs, Signs 3 and 23, each sign is mapped as a separate point and share numbers with the other sign or signs for the location. The theme essays uses two or three signs to examine a theme or topic the project addressed.


This project was submitted as a digital humanities thesis project for the John W. Draper Interdisciplinary Master’s Program in Humanities and Social Thought, now the Center for Experimental Humanities, to the faculty of the Graduate School of Arts & Science in partial fulfillment of the requirements for the degree of Master of Arts at New York University by Christina Thompson. Christina Thompson received a Master of Arts in Humanities and Social Thought and an Advanced Certificate in Museum Studies from New York University in 2017.

Sholette, Gregory. 2010. “History That Disturbs the Present.” In Dark Matter: Art and Politics in the Age of Enterprise Culture, 71-93. London, UK: Pluto Press.

Homelessness in the City →
REPOhistory and the Lower Manhattan Sign Project