Homelessness in the City 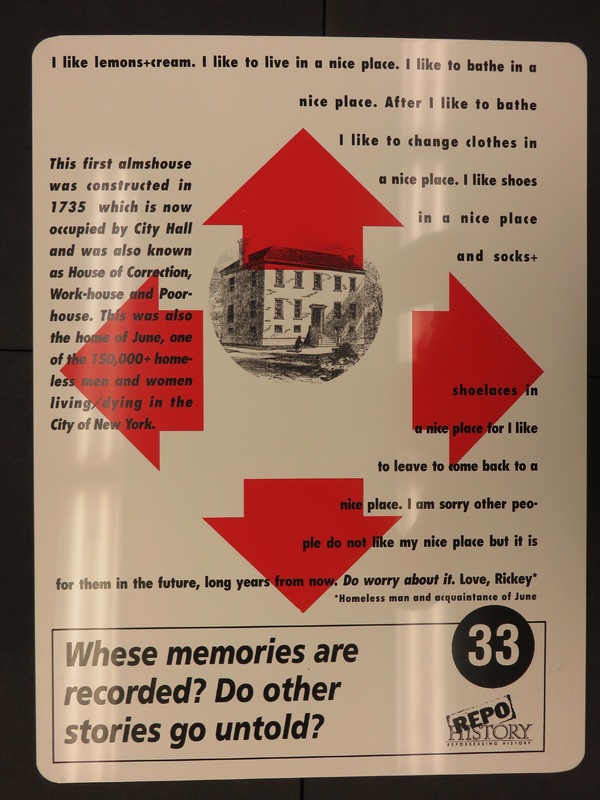 Providing for the poor and homeless in New York City has been a combined public and private undertaking. The balance between public and private efforts to aid the poor has shifted over time. Religious institutions were the first to address poverty. The city began to partake in relief efforts and eventually established the first almshouse in 1736 (da Costa Nunez and Sribnick 2015, 6). This first almshouse is illustrated on the reverse side of Sign 33- The First Alms House, located near its historic site, near present day City Hall, to connect how the poor in the past were cared for to the contemporary homelessness crisis.

Private organizations were established during the nineteenth century in an effort to keep families out of the almshouse, believing them to be dangerous to the souls of decent individuals. In 1876, reformers cut all cash relief in the city. However, this changed in 1931 during the Great Depression, when the city, along with the state and national, governments recommitted to aiding the poor (da Costa Nunez and Sribnick 2015, 6-7).


In 1938, New York State adopted an amendment to its constitution to express the state’s commitment to social welfare. This amendment, Section 1 of Article 17, states, “The aid, care and support of the needy are public concerns and shall be provided by the state and by such of its subdivisions, and in such a manner and by such means, as the Legislature may from time to time determine” (Stout 1996).

Four decades later, in 1979, Robert Hayes, a lawyer who co-founded Coalition for the Homeless, filed a class action lawsuit Callahan v. Carey arguing that a constitutional right to shelter existed in New York. The plaintiff in the case was Robert Callahan, a homeless man Hayes meet on the streets in the Bowery, in lower Manhattan. After two years of negotiations, Callahan v. Cary was settled with a consent decree and the City and State agreed to provide shelter for those who were homeless “by reason of physical, mental or social dysfunction.” In addition to providing shelter, the decree also set minimum standards, such as health and safety standards, to be complied to in City and State shelters. Sadly, Robert Callahan died on the streets before negotiations were finalized (Coalition for the Homeless 2017). Since Callahan v. Carey established the right to shelter, it has sparked debate and shaped the policies of social welfare in New York City (Fessenden 2016). 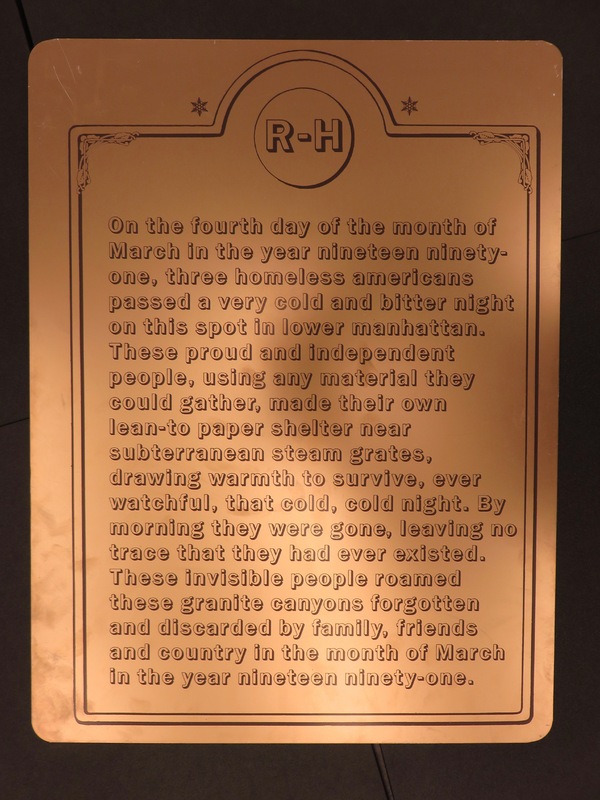 New York is one of a few places legally required to provide housing for those who need it, thus the city’s shelter population is ten times the size of other large cities (Fessenden 2016). In fall 2016, New York City’s shelter population approached 60,000 people (Goldberg 2016). Despite the right to shelter, there are still several thousand people who sleep on the streets or on the subways each night. While the city estimates there are 3,000 to 4,000 unsheltered homeless individuals, homeless advocates believe the city underestimates this number of unsheltered homeless New Yorkers, and estimate the number is higher, somewhere between 6,000 and 12,000 (Mathias 2015). June, memorialized on Sign 33, and the individuals described on Sign 6 attest to fact that even with the right to shelter, there are some who were and are unsheltered and are still on the streets.

Factors contributing to homelessness include extreme poverty and alienation of individuals who live alone or without family or are physically, mentally, or socially disabled. Lack of jobs, cutbacks to government welfare and social services programs, and a shortage of affordable housing also contribute to homelessness (Guzewicz 1994, ix). Various theories exist to explain why homelessness increased, particularly among younger people and families, in the 1980s, the decade leading up to the Lower Manhattan Sign Project. Some claimed it was the deinstitutionalization of mentally ill patients from state facilities, while others stated it was due to the increase of substance abuse. Due to the increase in homeless families, others argued the rise in income inequality and its effect on the widening the gap on the housing market (Jeantet 2013). 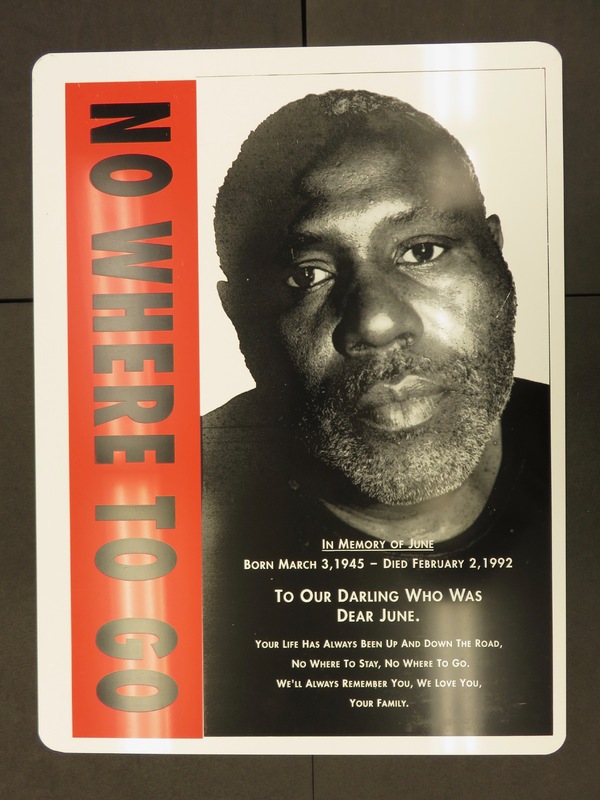 As David Dinkins ran against sitting mayor Edward Koch in the 1989 Democratic mayoral primaries, he criticized Koch’s policies for permanently housing the homeless (Jeantet 2013). Within weeks of taking office, Dinkins’ homelessness policy plans shifted. After increasing access to long-term housing through the shelter system when Dinkins took office in 1990, some of the changes that occurred include the city demolishing homeless encampments, barring “unauthorized persons” from public spaces, and accepting the Transit Authority’s removal of homeless people on the subways (Jeantet 2013; Roberts 1991). In late 1991, there were also proposals to enforce welfare eligibility requirements on applicants for housing in hotels and shelters to deter people from using the shelter system as a method for better housing and to expand the criteria for institutionalizing the mentally ill among the homeless (Roberts 1991).

This “Crackdown on the Homeless,” as The New York Times called it, happened as REPOhistory was planning its Lower Manhattan Sign Project (Roberts 1991). Thus, members Tom Klem (Sign 6) and Anita Morse and Andy Musilli (Sign 33) designed their signs to address an issue that pervaded New York politics at the time. These two signs force the viewer to think about the homelessness crisis in the city rather than ignore the visible problem.