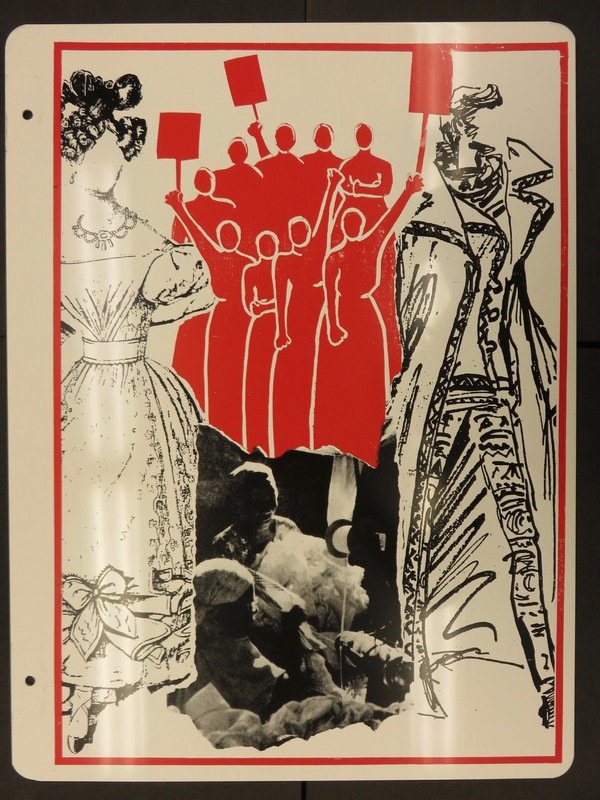 The red-framed collage on the obverse side of this sign wordlessly shares the history it tells on the reverse side. Printed in red in the center of the sign is a small crowd of women figures with several of whom hold signs, representing the United Tailoresses' Society. Below these figures is a gray-scale photograph of two women working in a garment factory. On either side of these images are fashion illustrations. One side shows a woman figure in a nineteenth century dress with her hair pinned up. On the other side is a gender ambiguous figure in pants and a long, large-collared coat from the early 1990s, the time when the sign was designed. Presenting the two fashion illustrations on either side of the graphic of the United Tailoresses’ Society and the photo of the factory in a collage together are used to make the connection between two groups.

The color red has a long history of association with leftist politics and the labor movement (Weiner 2017). Member Stephanie Basch chose the color red for the figures for the United Tailoresses Society of New York to allude to this historical association of red and labor movements. For this sign, the red symbolizes the sacrifice and fight for justice not only for the women in United Tailoresses' Society of New York, but also the people, including women and children, who were working in sweatshops in the garment industry in the 1990s, which Basch discusses on the reverse side of the sign.

When the United Tailoresses’ Society of New York was established in 1831, it aimed to improve their working conditions, including raising wages. One major concern was these tailoresses had people, their families, depending upon them for support (The Connecticut Mirror 1831 and The Watch-Tower 1831). In addition, the women also raised questions of the role of women in the workplace and feminism, perhaps due to Frances Wright’s recent lectures (Stanstell 1987, 133). In the text on the reverse side of the sign, Basch parallels the struggles of the tailoresses in the early nineteenth century to the concerns of garment industry workers in the late twentieth century. In the late 1980s, garment sweatshops were on the rise in the city. Employees, many of whom were immigrants, worked ten to eleven hours per day without overtime or holiday compensation, made less than the legal minimum wage, and had poor working conditions. Because many of the workers were immigrants, documentation to work legally, fears of deportation, lack of English, and few skills presented challenges to organizing unions (Wills 1987). The International Ladies’ Garment Workers Union (ILGWU) established community-based centers in the city to address the needs of these workers, including offering English classes, skills training, and immigration counseling (Milkman 2014, 13).

West side of Church Street between Leonard and Franklin Streets 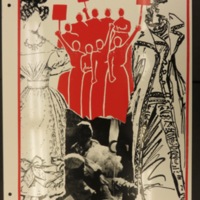 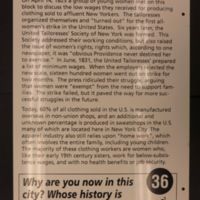