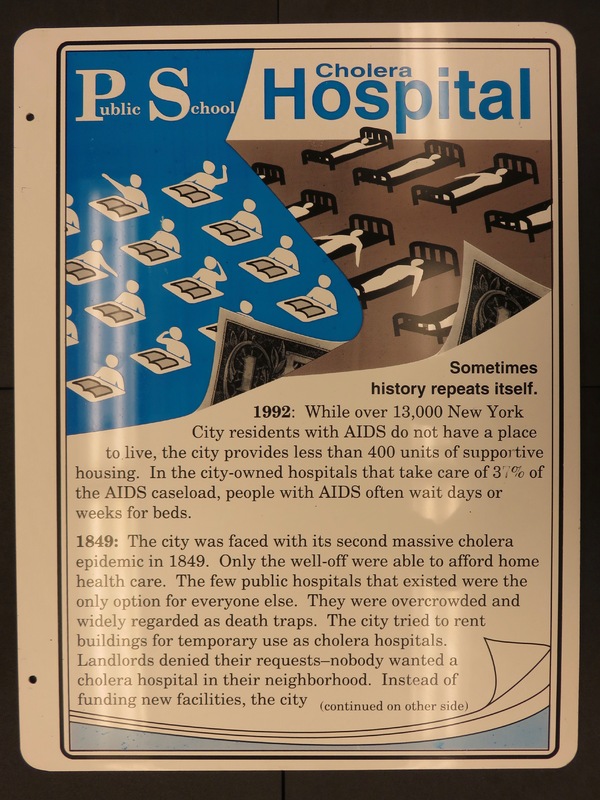 Unlike many of the other members who designed signs, Brian Goldfarb is explicit in the comparison of historical events to the ones that were happening at the time of the sign project. He even began his text with “Sometimes history repeats itself.”

The first comparison is the lack of city facilities for providing care. During the AIDS crisis in the 1980s and 1990s, inner-city hospitals handled a disproportionate share of AIDS cases because they served poor, minority communities with inadequate health services and because of the prevalence of drug use among the infected (Navarro 1991). Almost a century and a half earlier, after not building planned cholera hospitals, in the summer of 1849, the Sanitary Committee of the Common Council had to use four public schools for cholera hospitals (Schatzki 2015, 685-686). Cholera hit hardest in the poorest neighborhoods (Wilford 2008). Thus, the prominence of cholera in poorer, highly populated neighborhoods led some to believe that crowded tenements were the root of the problem (The New York City Department of Health and Mental Hygiene 2005, 9-10).

The second comparison is the connection between business interests and public health care policy. In the late 1980s, the cost of AIDS services to the city were on the rise (The New York City Department of Health and Mental Hygiene 2005, 58). While the city faced budget cuts, policies emerged benefiting developers (National Research Council [US] on Monitoring the Social Impact of the AIDS Epidemic 1993, 271; Schwartz 2016). As AIDS spread in the city, many of the surviving partners of those who had died were evicted from their homes, stigmatized as living with AIDS. Blocks of now vacant affordable apartments became high-end condos and market-rate rentals, leaving many struggling with AIDS to find housing (Schwartz 2016).

When the public schools were repurposed into cholera hospitals in 1849, the city stated lack of money was one of the main reasons for doing so. The Common Council stated, “The City is badly in debt, her expenses are running up annually, the Cholera will make a heavy extra bill any how, and economy must be studied as far as possible.” (New-York Tribune 1849). In the earlier cholera epidemic, in 1831, the City’s Board of Health was slow to recognize the cases of cholera due to concerns over interrupting the flow of commerce. (The New York City Department of Health and Mental Hygiene 2005, 7). Only after the epidemic spread did the Board of Health prohibit the sale of fruit, vegetables, and fish from open carts (Schatkzi 2015, 686).

Goldfarb conveys this second comparison in the imagery on the obverse side of the sign. One part represents the public school with figures who seem to be sitting at desks with books. The other part shows the cholera hospital with a ward of patients on beds. Both parts are designed to look like the corner is being lifted up, which reveals the corner of a one dollar bill. The bottom of the obverse side and the bottom of the text portion of the reverse side also have lifted corners, as if showing the revealing of the histories. This is the only sign where the common element question box, sign number, and REPOhistory logo are not framed on their own, instead the section is incorporated into the rest of the design.

National Research Council (US) on Monioring the Social Impact of the AIDS Epidemic. 1993. The Social Impact Of AIDS In The United States. Edited by A. R. Jonsen and J. Stryker. Washington DC: National Academic Press. https://www.ncbi.nlm.nih.gov/books/NBK234570/pdf/Bookshelf_NBK234570.pdf. 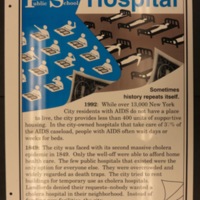 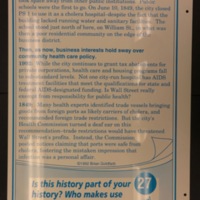