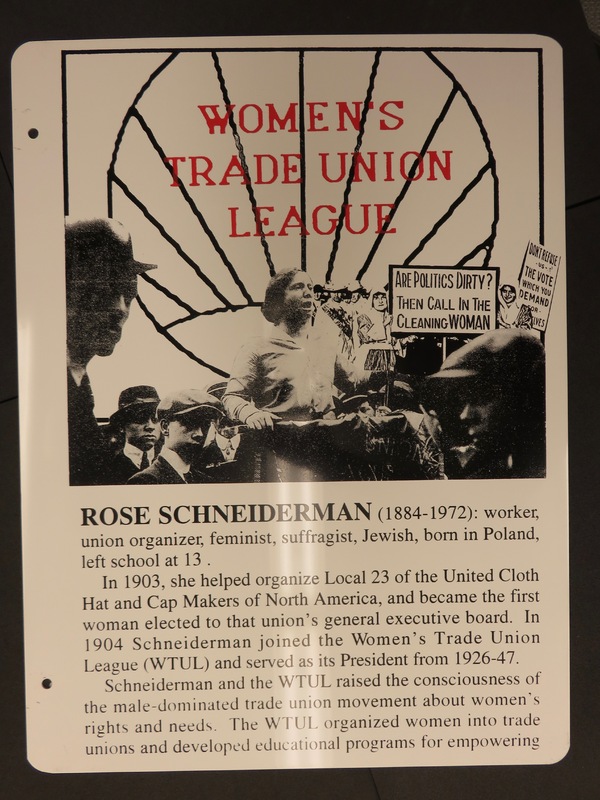 This sign features a collage of two photographs and a graphic. The photograph in the forefront is Rose Schneiderman, the subject of this sign, speaking at a rally in Madison Square Park in front of a banner for the Women’s Trade Union League (Donahoe 2015, 550). Above Schneiderman, is “Women’s Trade Union League” printed in red. Members Nannette Yanuzzi Marcias and Jeff Skoller used the color red for the name of the labor organization due to the color’s long historical association with leftist politics and the labor movement (Weiner 2017).

The photograph in the background is of a suffrage parade that marched on Fifth Avenue in 1915. The woman to the right of the “Are Politics Dirty? Then Call in the Cleaning Woman” poster is Schneiderman’s sister Jane. The sign Jane is helping hold argues allowing women to vote would clean up corrupt or “dirty” politics (Museum of the City of New York 2017). Schneiderman viewed the right to vote as a way to get protective legislation passed for working women (Gupta 2007). This photograph from the suffrage parade may have been taken during the brief time Schneiderman left the Women’s Trade Union League. Schneiderman left because she was disappointed in the general garment strikes and blamed the American Federation of Labor for the failures the Women’s Trade Union League faced in organizing women (Martens 2009, 155).

Behind the photographs is a circle with an arc inside on the bottom with lines extending outward from the arc. This design matches the one on the Women’s Trade Union League banner in front of the podium where Schneiderman was speaking. However, the cropped photograph on the sign does not show it (Donahoe 2015, 550). This design resembles the background of the National Women’s Trade Union League seal. On the seal, the design represents the sun rising and appears over the goals of the union: “The Eight Hour Day. A Living Wage. To Guard the Home” (Library of Congress 2017). Using the sun design recalls the designs of the Women’s Trade Union League and represents the sun rising on Schneiderman and the work she did in the League.

This sign uses the remarks she made to the striking laundry workers, who suddenly came into the room during her send off party for her trip to Puerto Rico, to “keep on fighting” as a testament to Schneiderman’s fighting for women’s rights and needs in the work place. Despite her send off party being with her wealthy friends, Schneiderman still took the time to address the women (New York Times 1934).

Although the sign mentions she was a feminist and suffragist, the text for the sign focuses on Schneiderman as a union activist. In addition to advocating for unions and women’s suffrage, Schneiderman also spoke for women’s rights. For example, in 1935, while president of the Women’s Trade Union League, she was a speaker at a forum on birth control organized by the American Birth Control League, which took place at Carnegie Hall (New York Times 1935). 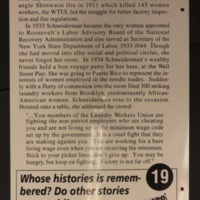