17 Who Owns Your Life:?: Insurance and National Health Care 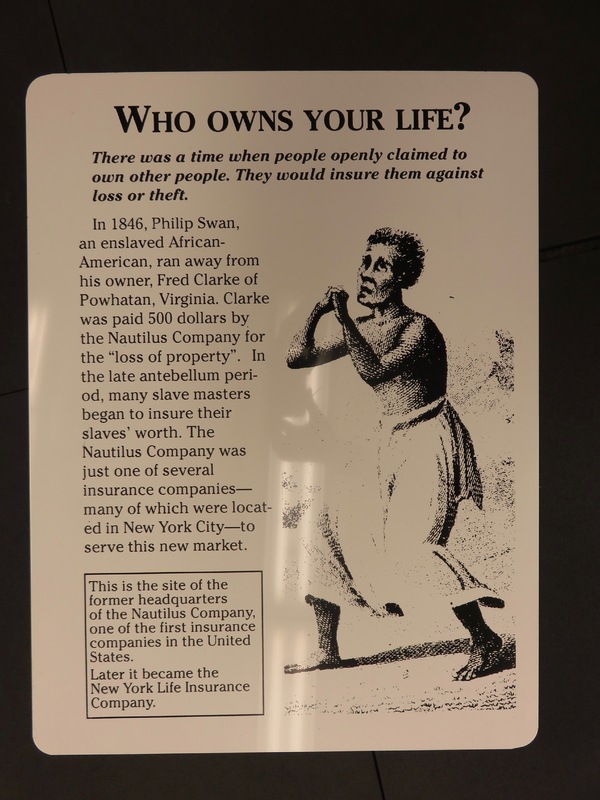 Sign 17- Who Owns Your Life?: Insurance and National Healthcare, obverse side

The text on the obverse side of this sign tells how in 1846, slave owner Fred Clarke was paid for “loss of property” by the Nautilus Company, now known as New York Life Insurance Company, when one of his slaves, Philip Swan, ran away. This narrative may actually be for the first death loss that Nautilus paid. In The Story of NYLIC: A History of the Origin and Development of the New York Life Insurance Company from 1845 to 1929, by the Company’s historian Lawerence F. Abbott, the Company paid its first death loss for $225.00, policy no. 228, on November 2, 1846 to Alonzo Clark for the life of his slave, Philip Swan, who died on August 28, 1846 (Abbott 1930, 37). An earlier edition of the Company’s history reports the owner of this first death claim policy as F. Alonzo Clarke (Hudnut 1895, 22). In Slave Era Insurance Policies Registries produced in the early 2000s due to disclosure laws, the owner of the slave Philip Swan, insured under policy no. 228 and died on August 28, 1846, was owned by an F. A. Clarke (Swarns 2016; IDOI 2004, 19 and 6). Philip Swan and other slaves who were miners were insured by their owners due to their high risk positions (Swarns 2016). Whether Philip Swan ran away or died, Clarke collected payment for his life.

Next to the text about Philip Swan and Fred Clark is an image of an African-American man with his hands clasped together, looking up, as if pleading with someone. This figure resembles a historic image that became a contemporary antislavery icon, the supplicant slave. The image of the supplicant slave is a kneeling man with chained legs and arms, with hands raised imploringly, and the phrase “Am I not a man and a brother?” Though the figure on the sign does not bear any shackles or show this phrase, the imagery of a pleading man is the same. The original image dates to October 1787, when the Society for Effecting the Abolition of the Slave Trade met and approved it (Trodd 2013, 339-340). REPOhistory member Carin Kuoni intentionally chose this image to connect to the image’s history with the narrative she was sharing. Kuoni also shares the connection between the history and the location of the sign in the small, framed box of text, which states the site is near the former headquarters of Nautilus Company.

On the reverse side of the sign, behind the text is a blue scaled photograph of a crowd of people. Kuoni starts the reverse side of the sign by repeating the question from the obverse side, “Who owns your life?” The sign contrasts slave owners being able to insure the lives of their slaves with the problem of people being unable to afford health insurance, particularly people with AIDS. The sign cites an article from The New York Times that reports someone without medical insurance is three times more likely to die than similar patients who have insurance (Associated Press 1991). This implies those who cannot afford healthcare do not own their own lives, like they are slaves to the capitalist society. The sign explicitly advocates for health care to be taken care of by the government.

South side of Wall Street between William and Hanover Streets

17 Who Owns Your Life:?: Insurance and National Health Care 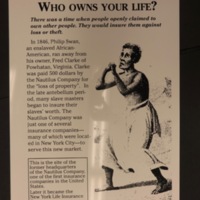 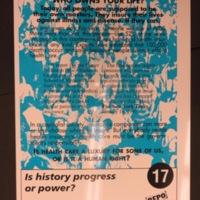