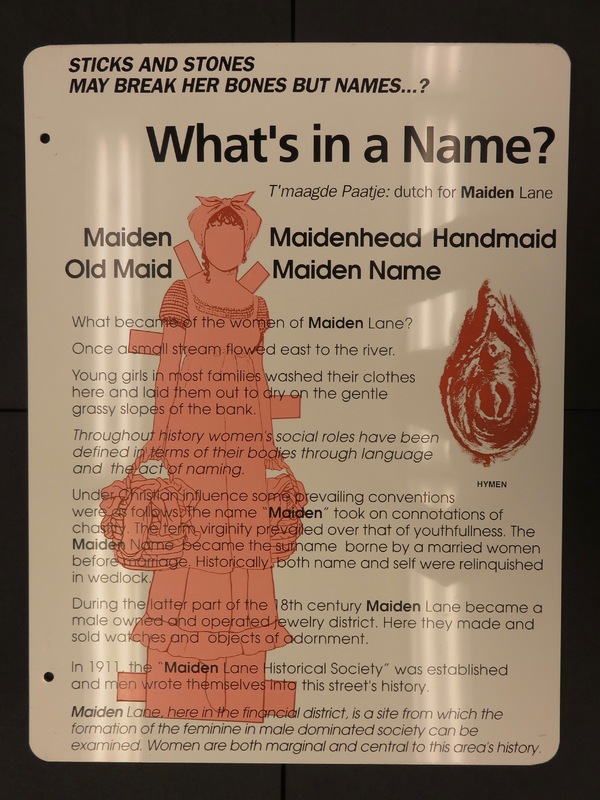 In the limited space for text and graphics, this signs shares three short histories or facts: the history of Maiden Lane, the word “Maiden,” and women in the labor force, specifically, the “glass ceiling.”

The obverse side of the sign features a pink-tinted paper doll figure wearing the attire typical for a young woman in the 1700s and carrying two baskets of laundry (Holloway 1992). This figure is inspired by the history of Maiden Lane. In the 1600s and 1700s, a now covered stream flowed along a footpath there, which was used by young women, also called maidens, to wash laundry along its banks. The Dutch name for this, T’maagde Paatje, meaning Maidens’ Path, also appears on the sign. In 1664, the English changed the name to Maiden Lane, which persisted even when the stream was covered (Tao and Lovejoy 2014).

As New York City developed, Maiden Lane changed, and by the late 1800s had become the Diamond District, a shopping area for jewelry (Tao and Lovejoy 2014). These businesses would likely have been owned and operated by men as the signs states. Around 1911, a group of men established the Maiden Lane Historical Society. The society put up a plaque to share the origins of the name (The New York Times 1911).

To emphasize the use of the word, maiden appears in bold font each time it appears in the text. Members Hilary Kliros and Betty Beaumont use the street’s history and criticize the use of the word maiden in its name due to its connotations of virginity. To show this connection, Kliros and Beaumont also included a medical textbook illustration of a hymen, a thin membrane that closes part or sometimes all of the opening of the vagina of virgins. An article from The New York Times expressed the inclusion of this illustration sparked some anger in some viewers, who called it “disgusting” and “offensive” (Holloway 1992).

The intention of focusing on maiden was to call attention to the fact that women’s social roles are often defined in terms of their body, with maiden being one of those terms. This is paired with the reverse side of the sign, which considers the role of women in the work force. The reverse side defines the “glass ceiling” and presents statistics and projections on women in the work force. Two of the key concerns mentioned are the gender pay gap and the lack of women in management positions. Kliros and Beaumont comment on the “glass ceiling” the first time it is used by including an asterisk to the note “The glass ceiling isn’t glass - it’s a thick layer of men (doing things their way).” The graphic behind the text is a profile of a woman in a skirt and high heels with a briefcase raised over her head as she climbs stairs. The woman seems to be using the briefcase to break a “glass ceiling” represented by the blue ink. This scene is all within the profile of a woman’s head.

South side of Maiden Lane, between Nassau and William Streets, in front of the Federal Reserve Bank 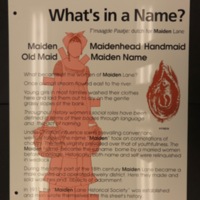 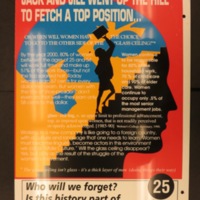